Sawa is a kind girl who supports her friends.

In the manga, Sawa has an interest in splatter and slasher films, with a particular affinity for Jason Voorhees from the Friday the 13th franchise.

Sawa is childhood friends with Onda and has watched Onda play football from when she was little to the present time. She has always supported Onda's efforts to improve herself.

Sawa is seen in the audience cheering Onda and the team on. She supported Onda's efforts to get accepted into the newcomer's tourney. She went to a temple to wish for Onda to get a kit. She comforted Onda in the rain when she didn't get in the official roster. When she realizes that Onda is in the game, she cheers for her.

Sawa serves as the manager for the Warabi Girls Soccer Team and the narrator of the series. She saw the team's match against Kunogi. In the anime, she decides to hold a cooking class. She explains that the team needs to keep up with Kunogi in stamina.

She observes the futsal tournament where Midori, Nozomi, and Sumire participate to earn money for new team kits. She also observes the Saitama preliminaries. After she meets Kazuo Takahagi, she is seen participating in soccer practice to prepare for the JKFB Interleague.

As the manager, Echizen supported the team from a distance. Later on, she became a substitute player.

Echizen thought of Tae as a strong opponent. She admired how talented Tae was. 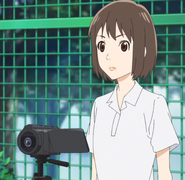