Mizuki Kaji (Japanese: 梶 みずき, Kaji Mizuki) is a secondary character in Sayonara Cramer. She is a second-year from Kunogi Academy High School and the captain of the team.

Kaji is a young girl with short brown hair and brown eyes. She is wearing an orange and white soccer uniform.

Kaji is mature such as shown when she greets Soshizaki after not seeing her in a while. She becomes terrifying when angry, though she rarely shows this behavior. She becomes strict when her teammates are goofing off such as when she caught Haruna Ito and Mao Tsukuda hiding in the bushes.

She participated in the practice match against Warabi.

As the captain of the team, she takes great responsibility for the team's wins or fails. 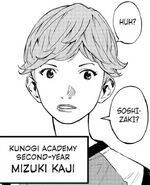