Chasing the Coming Past

Kazuo Takahagi (Japanese: 高萩 数央, Takahagi Kazuo) is a supporting character of Sayonara Cramer. He is a former football player who is currently a coach.

He wears black and yellow sunglasses, a white long-sleeved shirt and black pants.

Kazuo is shown to have strong coaching skills and he is a hardworking man who is usually a nice man. However, he can be hostile to people if he thinks someone is taking Goro Fukatsu's attention away from him which is shown in his interaction with Naoko Nomi.

Kazuo met Goro Fukatsu at the U-18 training camp. He was there when Goro injured his leg in the U-23 camp. They made a promise to become coaches once they retire from soccer. After Goro retired early to became a coach, Kazuo continued to play football. He went on to play for Japan, Spain and Portugal. Despite suffering from lower back pain, he took painkillers and continued to play, getting him the nickname "Ironman." Eventually, he retired and became a coach.

Kazuo is first seen following the Warabis to the soccer field. The girls capture him. Goro Fukatsu recognizes him and they go to the field together. At the field, Kazuo coaches the girls while they play. On the way home, he tells the girls about Goro's past. Kazuo runs into the Warabis at the JKFB Interleague. It turns out that he is Korenkan's coach.

Kazuo has known Goro since his national team days where he first met him at the U-18 training camp. Goro is an inspiration to him to the point that he believed that Goro would lead the future of Japanese soccer. Kazuo seems to have romantic feelings for him because he calls him "darling" and then "husband" at one point.

Kazuo was nice to Naoko at first, but became hostile in the next second because he thinks she's stealing Goro Fukatsu's attention away from him. 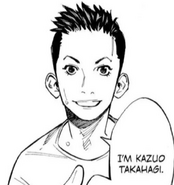